In Conversation with Shashi Tharoor 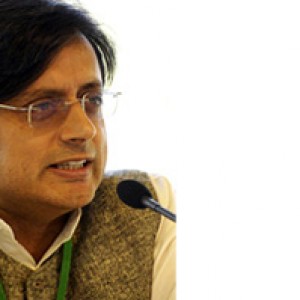 Aakanksha Tangri: Most students finish their undergrad at the age of 21, but at 22 you had a PhD from the Fletcher School of Law and Diplomacy. As a student, I’m very curious — how did you manage?

Shashi Tharoor: It was possible in India to finish highschool earlier than most places. I was the youngest kid in my class but I still finished highschool and a three-year undergraduate degree by the time I was 19. When I got into Fletcher, however, I was on scholarship, which when I converted it to Indian Rupees already meant that I was earning more than my father earned in India to support a family of five in what Indians would consider style. I realized the danger was that of the scholarship running out before I finished my work, so I worked at a rather frantic pace and I did my Masters degree in a year. I managed to dovetail some of that course work into the next degree – Master of Arts in Law and Diplomacy, and I managed to fulfill the requirements for PhD coursework while finishing that second Masters. In those days, Fletcher had a system, where you could demand an exception to the rules and submit an academic petition and you would be heard by a panel of professors. I asked for the permission to do my PhD orals in combination with my MALD orals that had never been done before but because my record was good enough they allowed me try. The net result is I was allowed to short-circuit a year’s worth of work and examinations to write the thesis. I managed to get my thesis proposal which too was accepted rapidly and left for India. I was very lucky in my timing in my field research as I was doing a thesis on Indian Foreign Policy Making under Mrs. Indira Gandhi, and her government fell very conveniently for me. She herself spoke to me and all her advisors were suddenly unemployed and willing to talk, and all the Foreign Ministers were alive and also willing to talk. I got this priceless collection of interviews and I went back and wrote it up in a series of 18 months days. I had an entire 650 page manuscript done in seven months after my PhD orals. Years later I went back to the Fletcher School where the current dean is Ambassador Stephen Bosworth, the American envoy to North Korea. He said not only are we proud of your record, but it will never be matched because we don’t permit the academic petitions, we don’t allow anyone to short circuit, so it looks like that particular distinction is safe and I did manage to survive on my scholarship.

AT: What was the biggest challenge you faced at the UN and how did you overcome it?

ST: I worked there for 29 years and there were a number of big challenges because I did different things. I began with the UN High Commission of Refugees and had some very interesting challenges there, including three and a half years running the office in Singapore, which was the centre of our efforts in promoting rescues at sea of the Vietnamese boat people. At some level, that was both enormously challenging and enormously satisfying because apart from being a relatively young man, dealing with one of the greatest human events of our time, there was a combination of dealings. Dealing with a tough government, the government of Singapore, the somewhat obliging governments of the countries of resettlement, the countries that actually owned ships that plied the south china sea who were rescuing the Vietnamese, the countries whose flags the ships flew, which were not necessarily the flags of the owners. Also, the shipping companies whose biggest interest was turning the ships around and getting the refugees off so they wouldn’t lose port charges everyday and of course running the camp itself which meant dealing with the Vietnamese who had just come off these boats. It was an extraordinary range of challenges simultaneously to deal with and therefore that experience for three and a half years looms particularly large in my consciousness. At the same time I felt I was able to put my head to the pillow night after night knowing the things I had done during the day had made a difference in a human being’s life. My success in persuading an immigration official or a visiting immigration minister to take a family into Canada, France or Australia has meant that at least one full generation since has grown up in a different set of possibilities that would have otherwise not been available to them had I not been able to make my efforts. 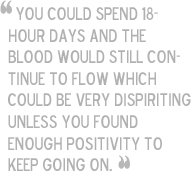 If I had to pick two other very different kinds of challenges, one would be my subsequent career in peacekeeping where for many years I was the person in the UN peacekeeping unit, later department that dealt with the civil war in former Yugoslavia. This was an extraordinary challenge because again dealing with an issue that was on the front pages of the headlines everyday but at the same dealing with it with enormously intractable difficulties and the knowledge that you could really spend 18-hour days and the blood would still continue to flow which could be very dispiriting unless you found enough positivity to keep going on.

That would be the other large challenge and again over a significant period of time from late 1991 to late 1995, that would’ve been most intense period after the Vietnamese boat people experience. A very different sort of a challenge was doing my part at the leadership of the organization alongside Kofi Annan, as his Under-Secretary General for Communications and Public Information and then as a candidate to succeed him. The latter part was a political/diplomatic challenge but earlier on a communications and managerial challenge in getting the message of the UN out to the world. All of this, I must say, meant that I had a very rich and varying UN career and I feel very privileged and fortunate. Many people spend large chunks of their working life doing dull, boring and soul-destroying sort of things, hating going to work in the morning, and so on, I’ve never had that experience and I think that is perhaps the most important thing one can do at the end of a working life. To look back and remember that it was actually something you look forward to in the morning, going to work and tackling the day’s challenges.

AT: What have you taken away from your time at the United Nations?

ST: Most importantly, the fact that in our world today, we’re full of what we used to call then – “problems without passports” – the world is full of problems that cross all frontiers uninvited that essentially are global in their scope, and that no one country or one group of countries, however rich or powerful they might be, can solve on their own. Looking at problems like climate change, but also refugee movements, human rights issues, obviously problems of terrorism, weapons of mass destruction but even things like epidemic disease, these are all problems which don’t just start in any one place, stay confined in one place or even affect people of any one place, and therefore there is thus a huge global orientation involved. My answer to that is that, because these are problems without passports we also need solutions across all frontiers; you need blueprints without borders to deal with them.
AT: What were the deciding factors for twinning Barcelona with Thiruvananthapuram?
ST: I came to Thiruvananthapuram which is the state capital after all of a highly literate state, technically Kerala is a 100 percent literate for everybody over the age of five which is unique in India and is in-fact pretty unusual in the world, it is a higher rate of literacy than the United States so to have a place like that and discover in how many ways people are still blinkered about the rest of the world, the extent to which they haven’t fully opened up their eyes and their minds to global currents was a fairly sobering experience. In my election campaign, I talked about throwing open the windows of Thiruvananthapuram to the world and one of the ways in which I thought we could do that was by finding a worthwhile twinning partner with comparable potential for relationship. In other words, Trivandrum is a coastal city, Barcelona is a coastal city, Trivandrum is a state capital, Barcelona is a state capital. Trivandrum has a reputation for being a centre of cultural excellence and Barcelona has the same reputation. The people of Trivandrum are football crazy and Barcelona is the home of Barca! Trivandrum has drinking water issues, Barcelona has overcome its drinking water issues and indeed Barcelona is now the leading water company in Spain. Trivandrum is about to develop a port, Barcelona has not only a major port but has actually got a port company that works in port development. The number of areas of potential cooperation except that Barcelona is five times as populous and probably hundred times as rich as Trivandrum is and therefore that gives us the opportunity to seek their help and advice in a constructive way.AT: A question about Barcelona can’t be complete without mentioning the eight Barcelonian players who were at this year’s World Cup. Did you catch the game?
ST: I didn’t have time to catch the game but I did tweet my joy that like a new bride, Trivandrum had brought luck to Barcelona and Spain because you actually found that people in Trivandrum had an extra reason to celebrate that the country from which their potential twinning partner was coming had produced such a successful team and with so many players from that city.
AT: Finally, your message for students?
ST: I would say that students above all should balance the responsibility that comes with being a student, that is your responsibility to study, to prepare for adult life, to acquire the qualifications that will stand you in good stead for your future profession. That is a phase of your life where responsibility and discipline have to be won and acquired because if you don’t have it now, you will not be able to develop it later. But you have to balance that whole sense of responsibility and discipline with I hope, a sense of joy, a sense of “I’m here on this planet once and I need to be not only happy, fulfilled doing things that mean something to me, but also to feel that the planet is a more interesting or even better place for my being here.” In other words, to make that contribution, to have a sense of one’s self as part of something very much larger. I would say to students develop the personal skills of responsibility and discipline. Never lose the capacity to have fun, to enjoy yourself, to develop your own potential, to take risks once in a while because fear of failure is something that comes with age and you should try to take risks. Everyone fails once in a while, I’ve been there, I’ve done that and the fact is that failure is often the best teacher for future success. Do all of that but never lose sight of the fact that you’re part of a larger home and that what you leave behind eventually and what you do will have an impact on others. If you’re conscious of that you will I’m sure lead not only a happy life but a meaningful one.